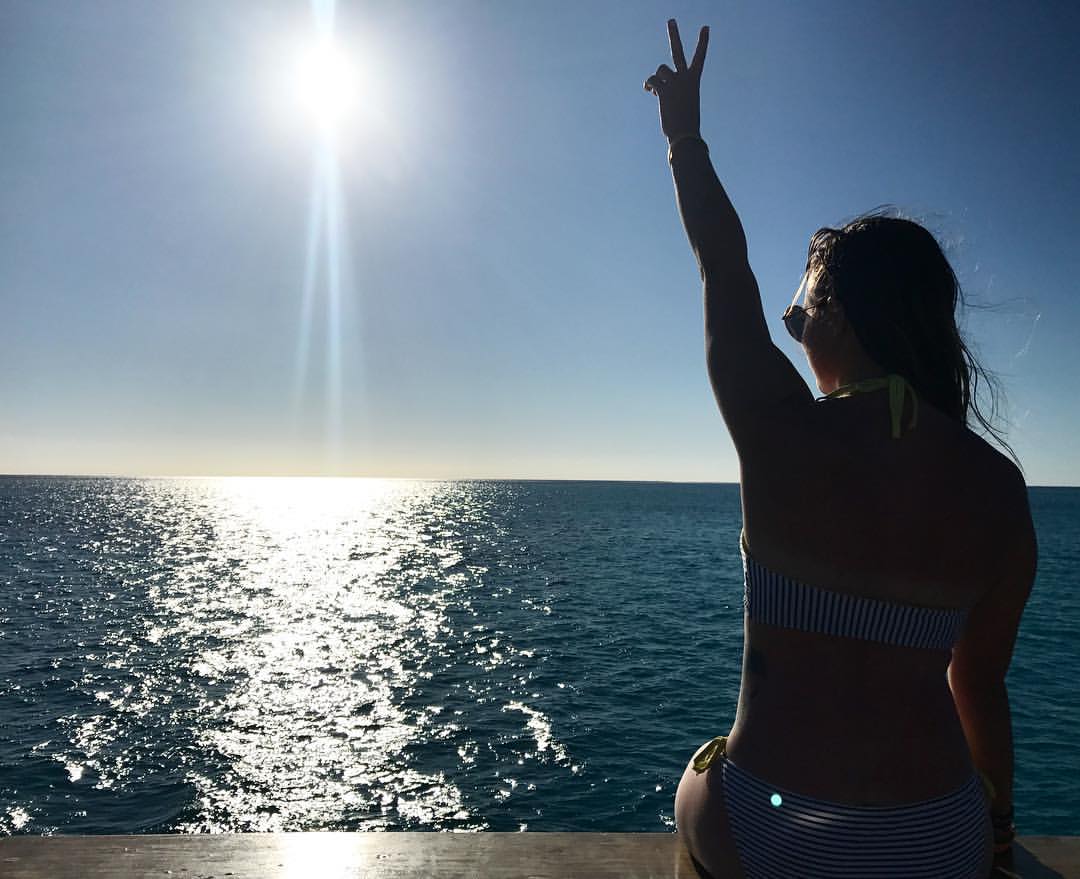 It didn’t matter what was going on in my reality or how many deadlines at work conspired against me, when you forget it all for a week, get off a 3 hour party plane and are greeted by men in floral shirts strumming their ukuleles, you know you’ve hit the jackpot.

I instantly converted to Fijian time when the welcome of “BULA” called my name. Me and my 200 or so entourage weren’t here for any old holiday. We were here for Spring Break Fiji – next stop Beachcomber Island!

If I could describe this holiday to you it would be one part Ibiza dance party, one part sunning siesta and three parts good old-fashioned Kiwi binge-drinking on a beach. It’s one big Contiki bus tour family without all the boring bits. It’s a youth package for us hard-working twenty somethings who listen to George FM and deserve to party our nights away right. It’s been running for five years now, and this year they did it three times, selling out consecutively. As one weekers we were the first to dip our toes in the water.

Dressing up as sailors with a corona in hand we set off for five nights of next to no sleep and a diet consisting of buffet meals Fijian style, sun and alchoooooool. 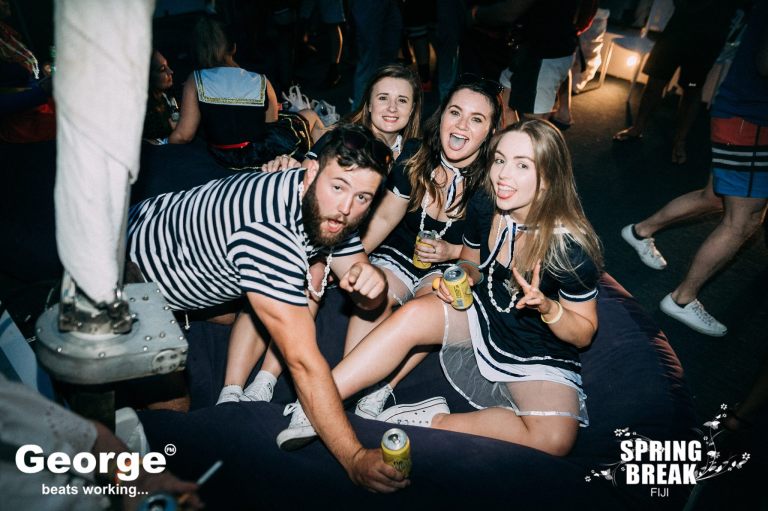 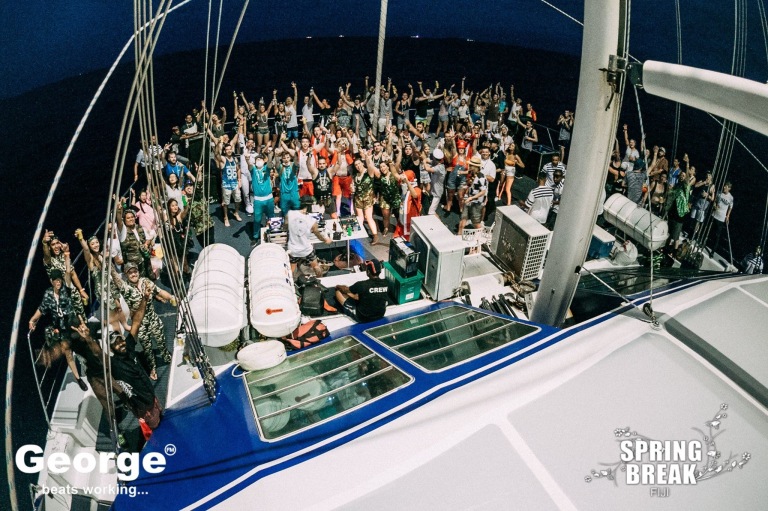 Let me sell it to you… There are DJs (hot ones), beers are $8, every hour is happy hour (we willingly made our way down the cocktail list) there is a nurse on site to treat feet exposed to coral cuts, condoms are $4, you can suba, jet ski, parasail, and you can also just sit around drinking all day and go home with a stranger (if that floats your boat).

The day trips were my favourite part, the memory significantly lacking due to one too many tropicanas. Sand bank party was a must. We paid a bit extra to be shipped out to literally a sand bank. When the tide is out it’s party on and that’s exactly what we did. Imagine a day of meeting new friends forever, drinking corona (by the end of it half corona half sea water, but we still drank them because Mum never raised a quitter), music and sun. 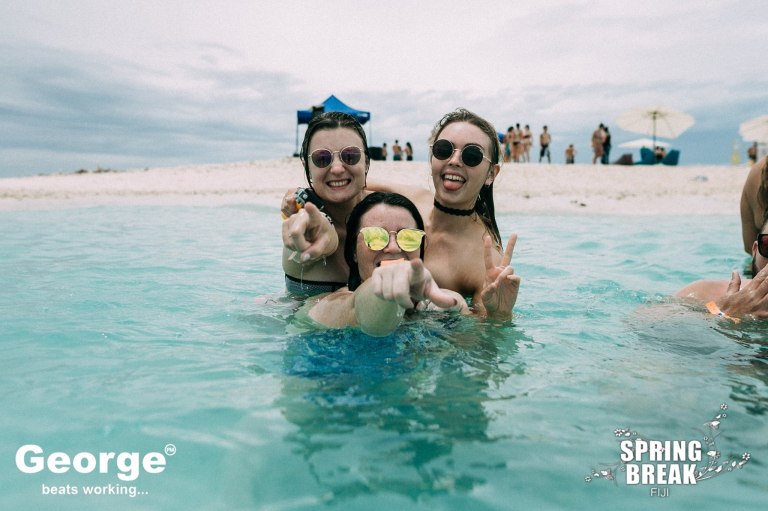 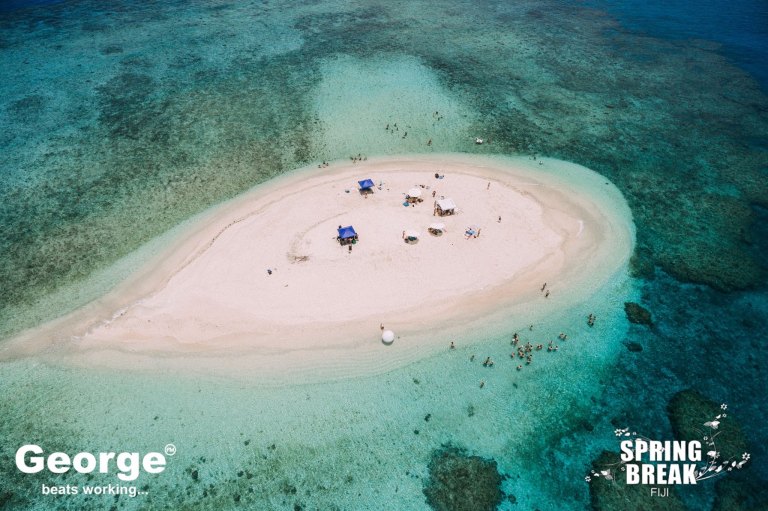 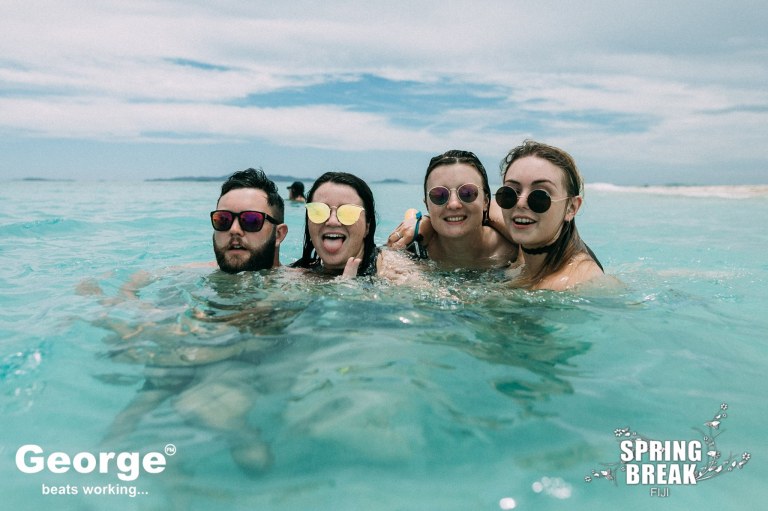 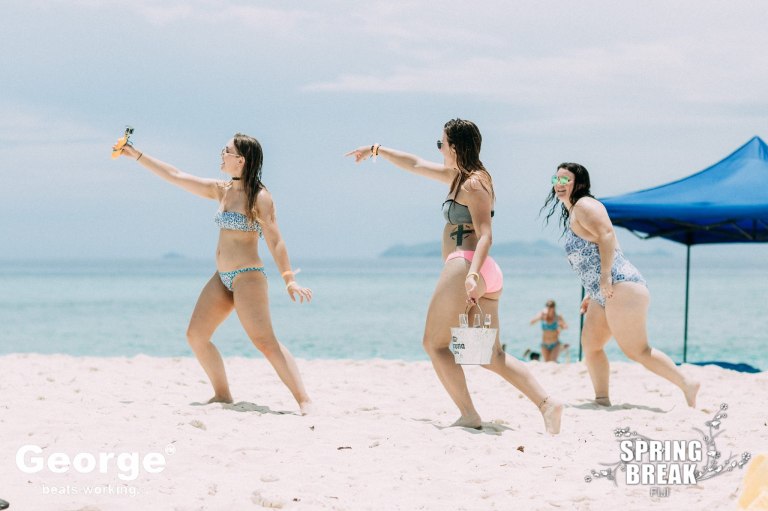 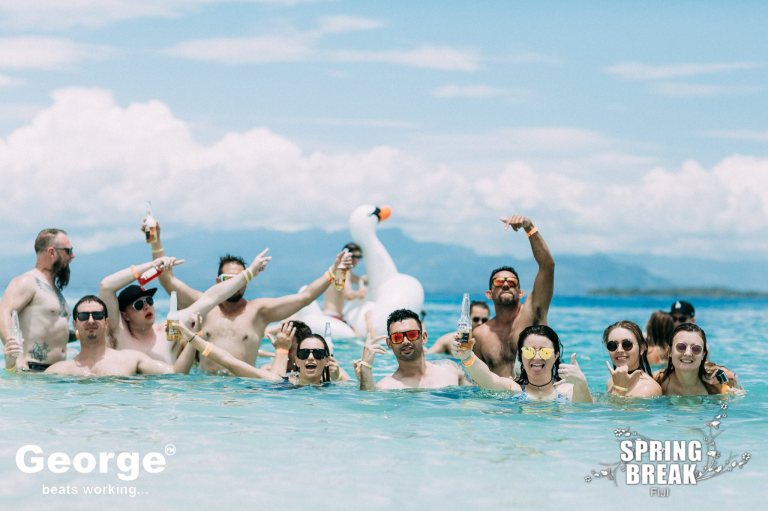 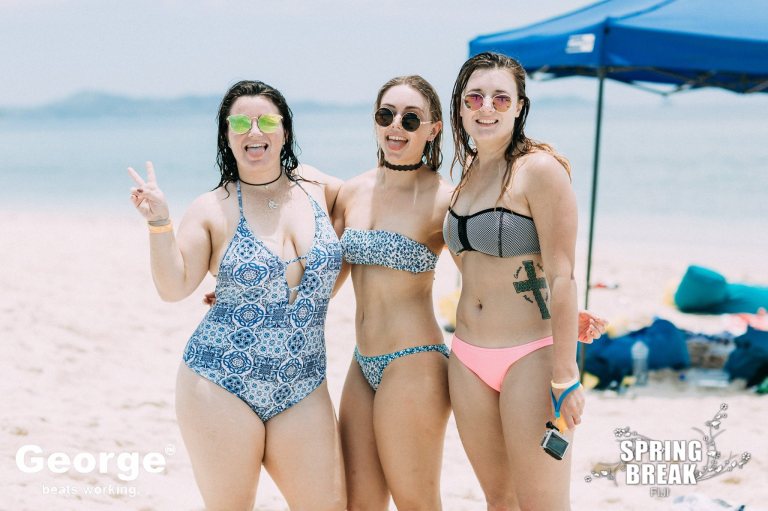 Then there was Cloud9 a pontoon in the middle of nowhere that serves cocktails and freshly made wood fired pizzas. Worth the extra money spent too. We jet boated (I use that term loosely as our boat broke down several times) past the famous Castaway Island, sadly without finding Wilson, past the remote island accommodation worth a whopping $20,000 per week, and arrived to what can only be described as the pot of gold at the end of the rainbow. It took a good couple of hours to get there but it was well worth it. It’s the kind of stuff you only ever see in magazines so I’ll let the pictures speak for themselves. We were well and truly floating on Cloud9. 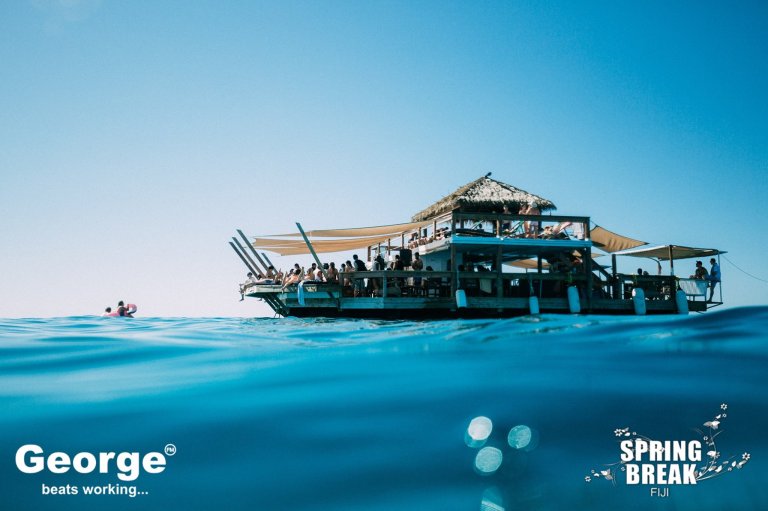 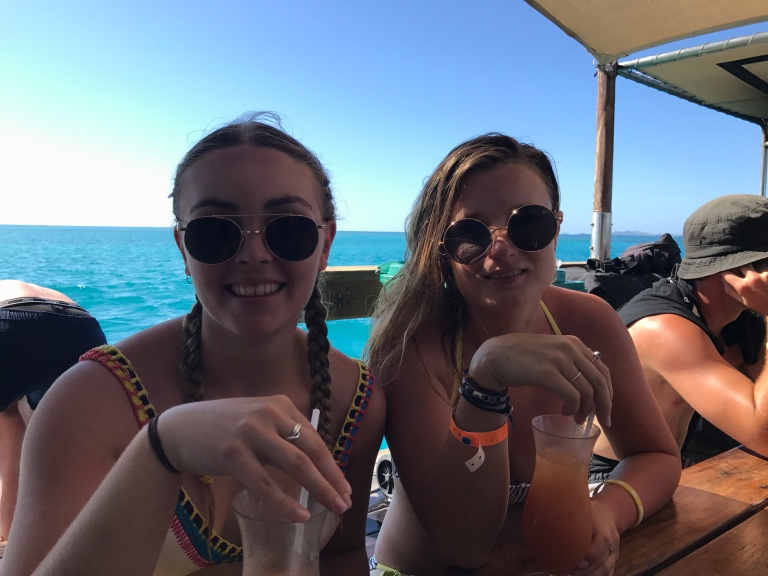 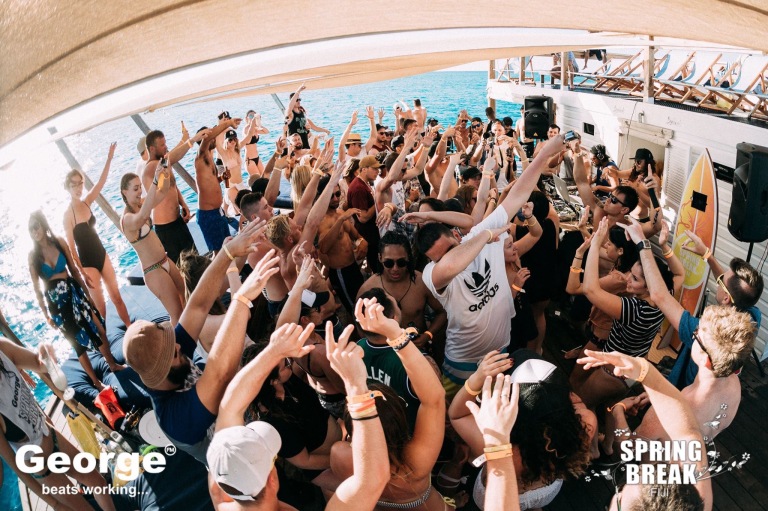 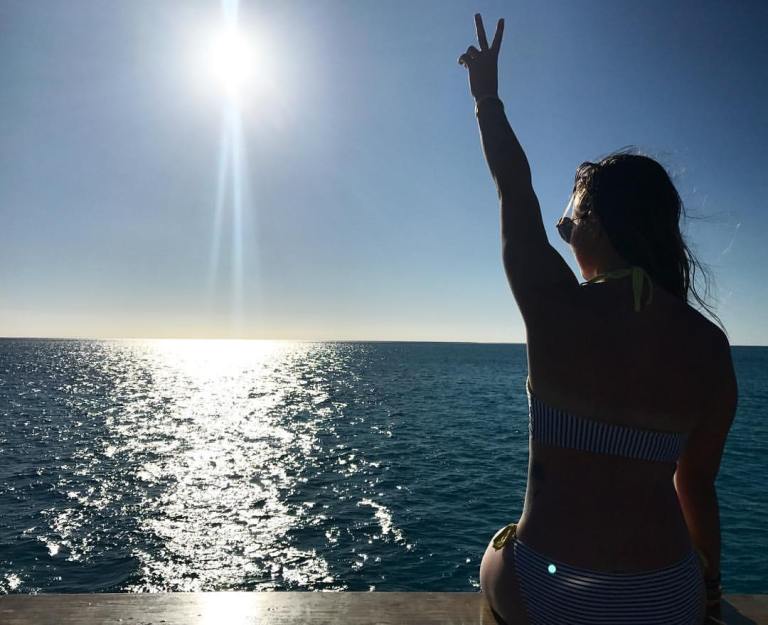 If the days weren’t enough to blow your mind, the nights were never ending. Sleep was null and void and cold showers were a plenty. Over the course of three of the nights there were themed parties that really got everyone involved. A toga party, a paint party, and a foam party (and a partridge in a pear tree).

Now what happens on tour does stay on tour, and some of you may think that Spring Break reads like some bad porn movie. BUT there was nothing Roastbuster-ish going on. We felt safe and we all looked out for each other. It felt safer than a night at the Palmy bars where you don’t trust anyone who catches your eye. With only 200 of us on an island, most of who you see over breakfast,  there was without a doubt a kind of family restraint in place. The tone was playful not predatory, even if some comments were thrown at here and there “tits out for the boys” it was nothing more than a bit of harmless fun. 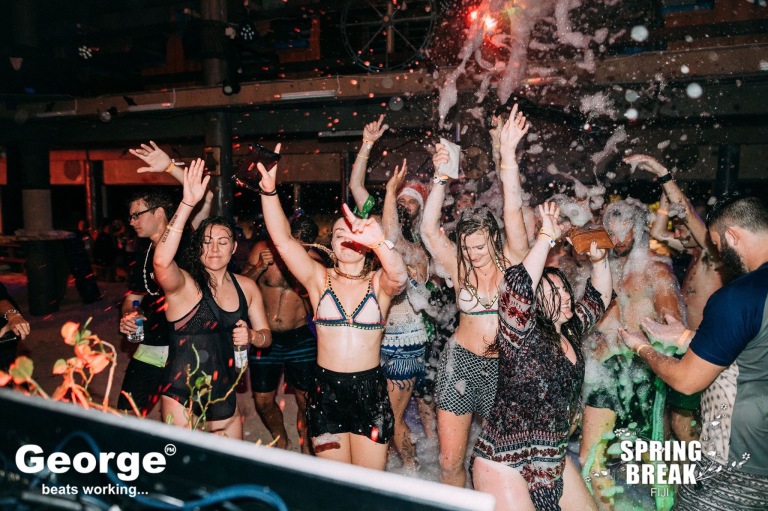 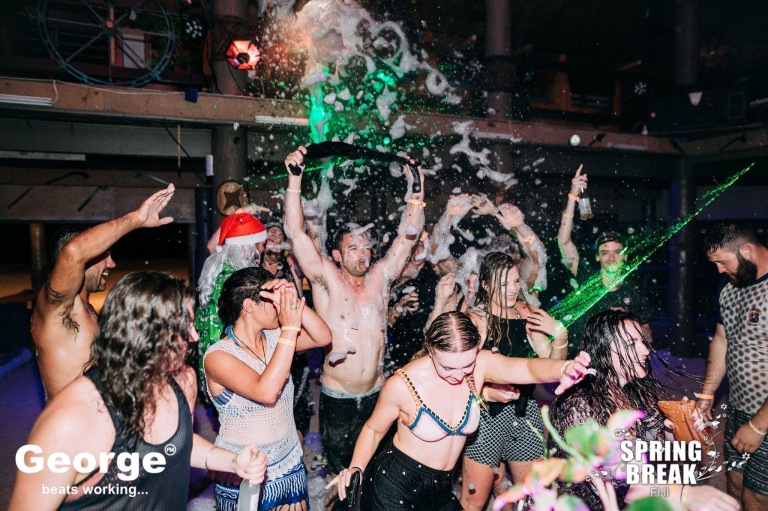 There were some guys there that made you laugh. We came up with nicknames for some of them and picked the ones out who had spent the last few months pressing at the gym and flexing in the mirror to make sure they looked their best in board shorts. Some of the girls… don’t even get me started. Fake eyelashes extending the length of the island, tits perky and shorts half way up the rear. Call me old fashioned but it provided for some wicked entertainment. In saying that, the week wasn’t some kind of judgemental beauty contest. More like a socialist utopia, open to anyone with an airfare and a beach towel.

On occasion you did catch the scent of a douche bag or the gullible. One guy bought a round of tequila shots for what appeared to be the entire entourage. End of trip room bills for some totaled well over the $1000 mark. But I guess for some it was harmless (expensive) fun. Hormones were in the air and alcohol in the bloodstream. Blue water, white coral sands, and humidity for days. The best comparison to a Friday night in town EVER! 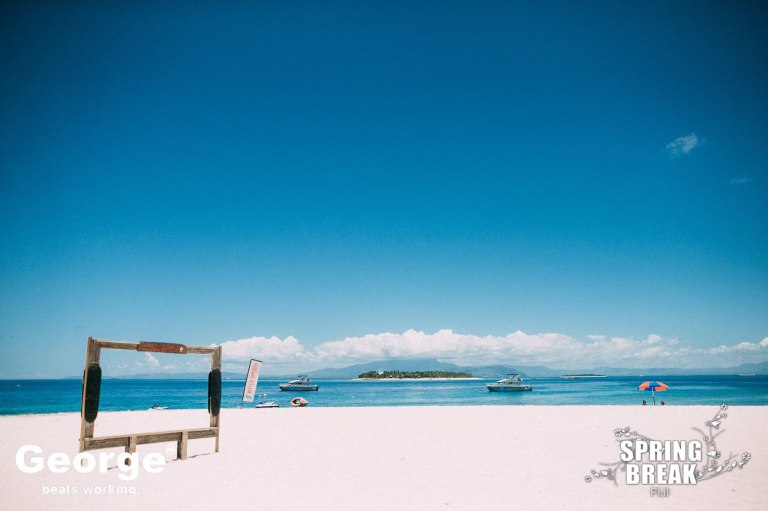 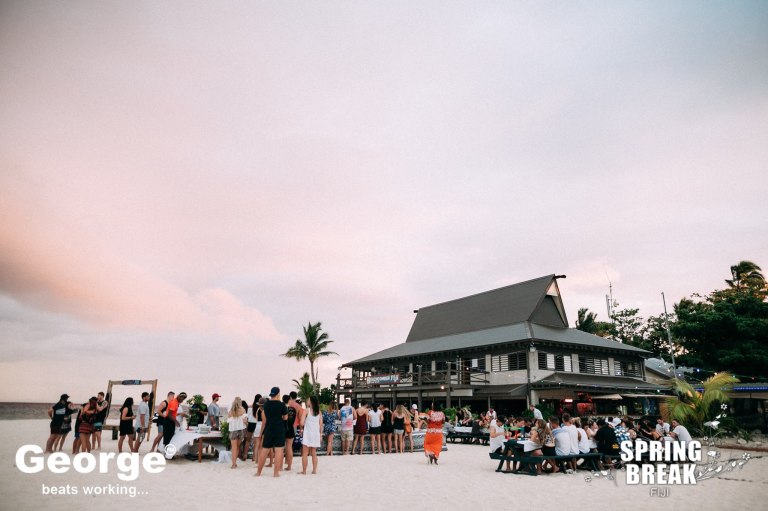 I have to give special mention to the locals. Working on Beachcomber Island are their livelihoods. They were friendly, accommodating and above all else fun with a capital F. You can learn a lot from the Fijians. Never take life too seriously and always smile. Some of the local women have stories that will break your heart and group vacations like this are their livelihood. One woman would be lucky to return to the mainland for Christmas Day to see her family. One can’t see her daughter until she is forced to marry the father of her child. And the same age as me! 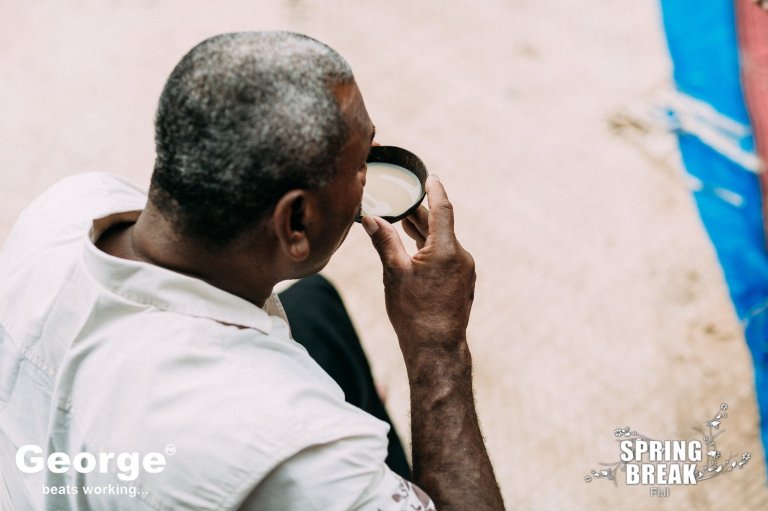 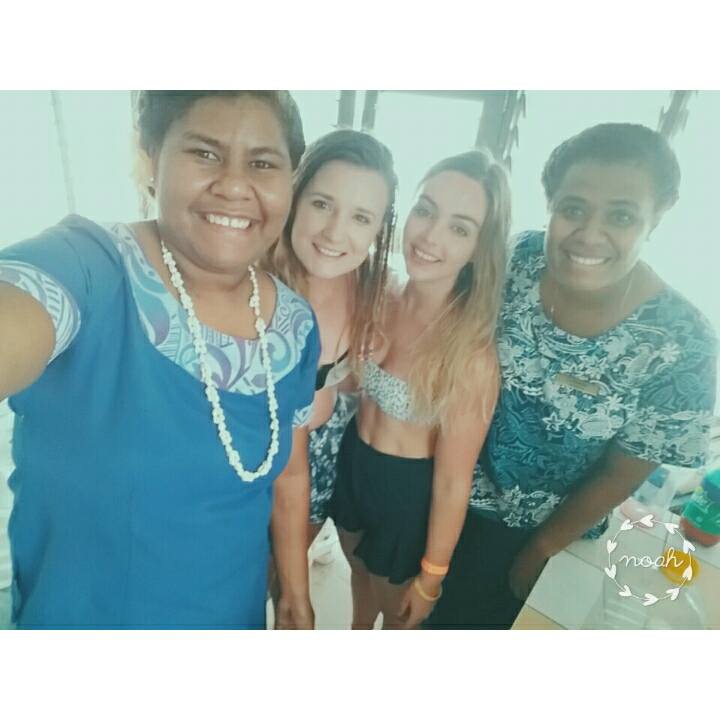 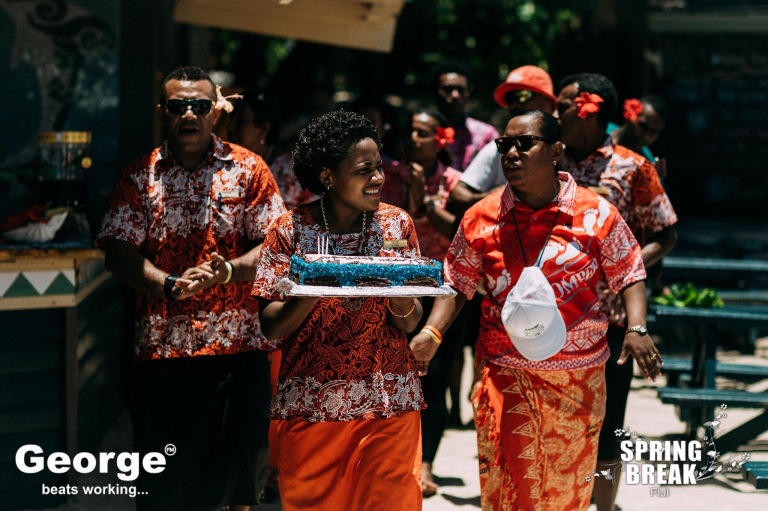 After days of no sleep, wild beach parties, one corona two corona, three corona four, and jumping into the clearest blue waters I had ever seen in my life, reality handcuffed us back home. The best part? Getting to do it all with my rad friends. 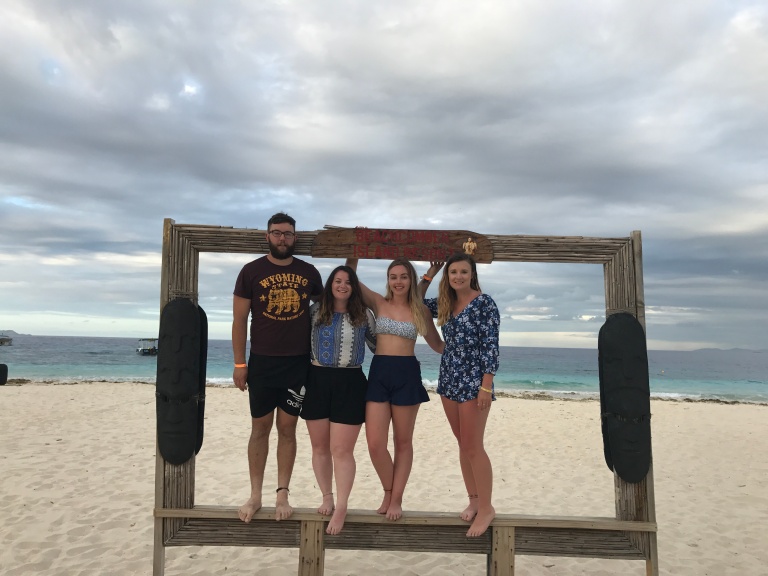 One thought on “Vinaka Fiji.”