If you think us New Zealanders got out of this year in harmonious fashion with a bouquet of peonies in one hand and a bag of unicorn dust in the other, you’d be sorely mistaken. But I can’t say that that’s a bad thing. If one can sum up the year that was it would go along the lines of:

We dabbled on the world stage in three world cups this year and I think I can speak for all of us kiwis when I say we’ve only just recovered from the heartbreak of a ‘boundary count’ at the Cricket World Cup, our Silver Ferns bringing home gold in a feat many of us thought would never be accomplished, and collapsed in a heap of confusion when our All Blacks bowed out in the Rugby World Cup semi finals.

As a country we also faced immense tragedy in the aftermath of the Christchurch terror attacks back in March. It feels like we were all attacked that day. And while only part of this was true for our Muslim community, it still feels that somehow the very fabric of who we were as a country was attacked in an historic manner. We were also gripped as a nation when Grace Millane’s murderer was convicted of his crimes. And while these events were on a national scale it’s important to reflect personally on those families who lost, loved and triumphed this year. While at times tragic, it’s crucial to remember as we come to a new year that tragedy can symbolise an immense appreciation for what we do have and continue to strive to have every day.

And to all the stuff in between… the every day grind and the moments that got us through the long winter months. But I can’t help but think that for us 2019 kiwis we have a tendency not to focus on the little stuff and instead have this obsession over the next best thing. A hope, an assurance that things will always get better now than what they are – do this, that, and the other thing and everything will improve. But alas, no one has that kind of answer for anyone. Because even if all the problems of today get magically fixed, our minds always still seem to perceive the inevitable negative of tomorrow. So instead of skipping over the ‘stuff’ and looking for hope lets try this:
Don’t hope.
Don’t despair, either.
Don’t deign to believe you know anything. It’s that assumption of knowing with such blind, fervent, emotional certainty that gets us into these kind of pickles in the first place – the “WHAT DOES IT ALL MEEEEAAAAN” pickles.
Don’t hope for better. Just be better. Be something better. Be more compassionate, more resilient, more humble, more disciplined. Many people would also throw in there “be more human” but no – be a better human. And maybe, if we’re lucky one day we’ll get to be more than human. Who knows what this decade will bring. But live your every day stuff with a sense of purpose and action as opposed to hope and a means.

2020 and beyond is a chance to dare. Dare for a post-hope world where people are never treated merely as a means but always as ends, where no consciousness is sacrificed for some greater religious aim, where no identity is harmed out of malice or greed or negligence. Dare to hope that one day the news media will no longer have incentives to optimise content for emotional impact but rather for informational utility and that technology will seek not to exploit our psychological fragility but rather to counterbalance it; that information will be worth something again. Dare to hope that education and our health care system will get a much needed facelift, prioritising emotional practices to help children understand their emotional development while also letting them run around and scrape their knees. Dare to hope that the oncoming catastrophes of climate change and automation are mitigated, if not prevented by the inevitable explosion of technology or that some idiot with a nuke doesn’t obliterate us all before that happens.

2020 is a chance for our lives to mean something, and while the startling advance of everything in this decade has made finding that meaning more difficult, the ultimate innovation will be the day we can manufacture significance without strife or conflict, finding importance without the necessity of death.

So in a quest to create meaning with a sense of contentment I summarise each year with a top five. Moments or ‘stuff’ that made my year a great one. These moments were moments of heightened emotion – not necessarily moments of happiness but also moments of anxiousness, trepidation and satisfaction. ‘Stuff’ that influenced me to finish 2019 with a sense of pride as well as a thirst for what the next year will bring. 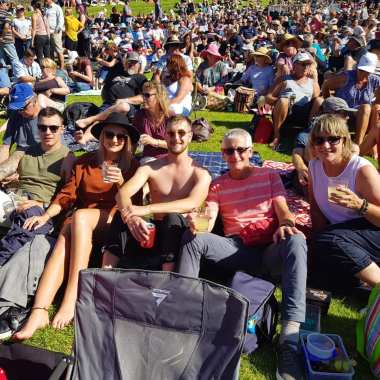 And with that comes a new year and decade. One of mixed emotions, moments and memories. One where we all have the opportunity for a fresh start with fresh goals and a fresh outlook.